skip to main | skip to sidebar

Marx Brothers Place is happily and cheerily back in the news today!

Somebody Let the Dogs Out on Marx Brothers Place: Watch the New Movie Short on YouTube Right Here

Advocating on behalf of historic Marx Brothers Place in NYC, the 93rd Street Beautification Association invites everybody to watch its latest preservation short (9 min) - The Doggy Movie - which has just been launched to YouTube!

Please take a moment now to watch The Doggy Movie by simply clicking on this link:

Thanks! We really hope you all enjoy watching the little movie starring Marx Brothers Place residents Jackie the Boston Terrier (voiced by Judith Hendra) & Victor the Black Russian Terrier (voiced by Kurt Fuller): These feisty pups really know how to deliver a message!

The Doggy Movie is a real HOWL!
Posted by Save Marx Brothers Place at 8:13 AM No comments: Links to this post

In the meantime, enjoy watching this sneak peek trailer of The Doggy Movie: http://www.youtube.com/watch?v=H7pkmJiWAgM!

See you at the movies!
Posted by Save Marx Brothers Place at 5:07 PM 2 comments: Links to this post

In his latest post about the 93rd Street Beautification Association's ongoing preservation campaign, Leonard Jacobs takes on the evil forces that have persistently obstructed the lawful landmarking of historic Marx Brothers Place in Carnegie Hill.

We appreciate Jacobs' courage, but given the length of the horns spotted poking up above the primped coiffs of these evil doers, we strongly recommend that the NY theater critic and social commentator start hanging some mighty huge cloves of garlic right next to that faithful kitchen witch of his.

Please click on the link below & read the full story on Jacobs' popular web site The Clyde Fitch Report: http://www.clydefitchreport.com/2010/09/spurned-by-cb8-and-garodnick-marx-brothers-place-goes-to-the-dogs/#comment-24105.

Thanks!
Posted by Save Marx Brothers Place at 6:44 AM No comments: Links to this post 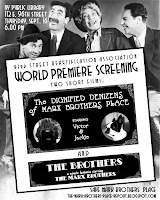 Don't miss the World Premiere of the latest save Marx Brothers Place preservation campaign movie short on Thursday, September 16 at the NYPL 6-7PM.

Details can be found on the Save Marx Brothers Place blog: http://savemarxbrothersplace.blogspot.com/2010/09/sneak-peek-world-premiere-of-latest.html.

Please RSVP (name & number of people in your party) to 93rdst.beautification@gmail.com at your earliest convenience.

Hope to see you all there!
Posted by Save Marx Brothers Place at 12:59 PM No comments: Links to this post

As you may recall, Harpo Marx' son Bill wrote to Manhattan Borough President Scott Stringer asking him to intervene and vacate the invalid July 21 NYC Community Board 8 vote on Marx Brothers Place.

After hearing back from the Borough President's office, Bill Marx forwarded the BP's reply on to us: Essentially, while the BP's office expressed its ongoing interest in the 93rd Street Beautification Association's preservation efforts, the letter indicated that the BP's hands are tied when it comes to undoing a CB8 vote and that the best avenue for redress would be to ask CB8 to vacate its own vote.

So, following the BP's lead, the 93rd Street Beautification Association has asked CB8 to vacate the invalid July 21 vote.

And now we need to ask you to let CB8 know that it should do the right thing by tossing the tainted vote and restoring the 93rd Street Beautification Association's Request to CB8's calendar as soon as possible before any more historic structures on Marx Brothers Place are forever lost to the wrecking ball.

Please click on the link below & cut & paste & send the message to CB8 TODAY:

Many thanks for your help!
Posted by Save Marx Brothers Place at 12:10 PM No comments: Links to this post

In the wake of the tainted Community Board 8 vote on whether to support the 93rd Street Beautification Association's Request to extend the historic district so as to include the priceless collection of historic structures just east of the current district boundary line, Harpo Marx's son Bill has written a letter to Manhattan Borough President Scott Stringer asking him to intervene on behalf of the campaign to preserve & designate historic Marx Brothers Place in Carnegie Hill.

Please join Bill in this effort today by simply clicking on this link & sending the message to the Borough President: http://the-marx-brothers-place-report.blogspot.com/2010/08/vacate-cb8-vote-on-marx-brothers-place.html. Thanks!

We also thought you might like to read the letter that Bill Marx sent to Manhattan Borough President Scott Stringer. So, here it is:

My name is Bill Marx, and Harpo Marx is my father. I live in Rancho Mirage, California, not far from the home he built in 1956 that has recently been deemed a Historic Site by the City Council. I did not have anything to do with the recommendation of such an act, but I did support the concept of it having a necessary historical purpose for the total Palm Springs area. So, as well, I have no real personal burning, self-serving reason or concerns for the preservation of Marx Brothers Place other than it would be, of course, a well deserved tribute to them and is such an important slice of America's and in particular Manhattan's history that I truly believe should live on in the minds and hearts of all people who cherish America's Theater history; the film industry's history and Broadway Theater history and those who contribute to its ongoing success. I went to Juilliard School of music when it was across from Columbia University, so I have always had a special place in my heart for what I consider to be the greatest city on earth. For the many fans and tourists that visit the historical places of Bach or Stravinsky or Albert Einstein or any person who has brought positive influence to so many, the preservation of the area where the Marx Brothers were all born and grew up would be also similiar in its magnetic purpose to the public interest. No matter what the outcome, the Marx Brothers will always remain popular, so it's more about seeing to it that fascinating bits and pieces of New York are preserved historically, thus making it the unique city that continues to be the hub of culture the world over.
On behalf of Harpo's family, thank you for your time in addressing this issue, and we hope that you will help to see that Marx Brothers Place can remain as one of the many beacons that continue to light up all of Manhattan for all mankind.
Respectfully, Bill Marx
Posted by Save Marx Brothers Place at 7:39 AM No comments: Links to this post